The UFC Fight Night “Daukaus Vs Lewis” was the final event of 2021. Dangerous one-punch knockout artist Derrick Lewis destroyed Chris Daukaus in the main event of the evening. UFC Vegas 45 also brought kick stoppages back to life. Justin Tafa finished Harry Hunsucker via shin to the chin, Cub Swanson wheel kicked his way through Darren Elkins for another Performance of the Night award. Melissa Gatto delivered an astonishing body kick to Sijara Eubanks’ mid-section, which later led to a TKO stoppage.

A lot of great combats are coming up in 2022. Derrick Lewis is set to deal with heavy-handed Australian kickboxer Tai Tuivasa. Petr Yan rematches Aljamain Sterling at UFC 272 for the bantamweight strap, looking to avenge the DQ loss from the first fight. A few more entertaining bouts are announced – Ryan Spann Vs Ion Cutelaba, Askar Askarov Vs Kai-Kara France, Alexander Romanov vs Ilir Latifi…

Max Holloway is out of UFC 272 title bout against Alexander Volkanovski due to an injury. Many fighters are willing to take part in a 145-pound belt war. The former Olympic wrestling champion and ex-UFC 125 and 135-pound division champ Henry Cejudo leads the charge of volunteers willing to replace “Blessed” against the powerful Australian.

Volkanovski has already turned down number 3 Yair Rodriguez because “he fought only once in two years and was coming off a losing streak”, and the current #8 Giga Chikadze, who meets Calvin Kattar this weekend. Yet, the Australian hard-hitting hillbilly verbally agreed to meet #4 “The Korean Zombie” Chan Sung Jung, leaving the door open for “El Pantera” if the Zombie fight doesn’t come to fruition. The list of other candidates willing to deal with “The Great” includes Josh Emmett and Bryce Mitchell. 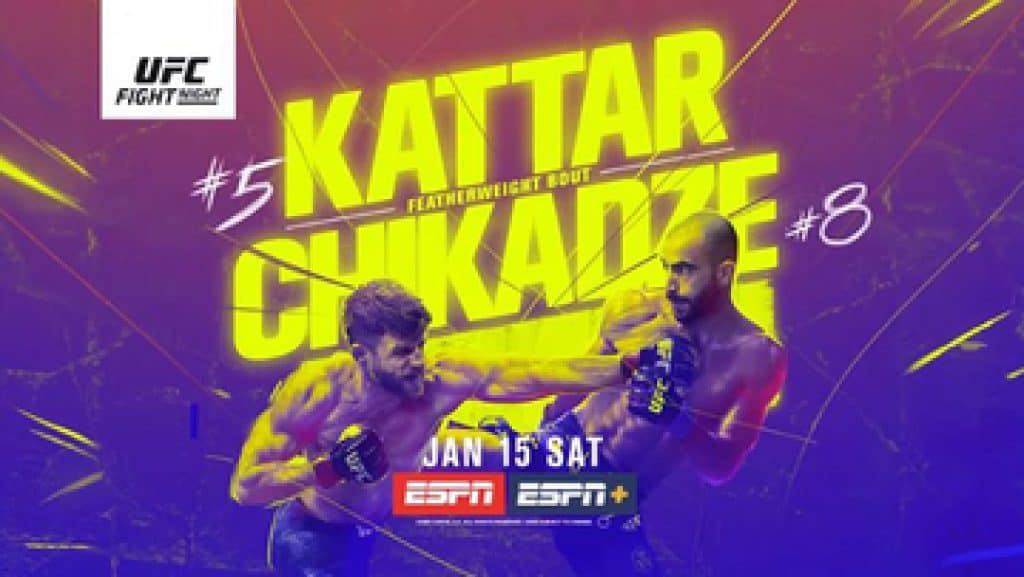 UFC Vegas 46 is going to take place this weekend, on January 15th, 2022, in Apex Center, Las Vegas, Nevada, USA. The preliminary card kicks off at 4 PM ET, while the main card gets underway at 7 PM ET. The event is gonna air live at ESPN+. The weigh-in is expected to take place in the same venue in “Sin City” at 9 PM PT (noon ET). It will probably go live on the MMAJunkie YouTube channel.

The small cage brings a great opportunity for wrestling/grappling specialists. Fans were thrilled due to a clash of styles between Michel Perreira and Muslim Salikhov, but unfortunately, Salikhov is out of the fight, so the rematch between Katlyn Chookagian and Jennifer Maia is bumped up to the co-main event of the evening.

Currently, the UFC Vegas 46 card looks like this, but there’s a possibility of last-minute changes.

Don’t miss the UFC event this Saturday, and keep in mind that the next weekend brings UFC 270 pay-per-view event, headlined by a 265-pound strap banger between Francis Ngannou and Ciryl Gane.