UFC Vegas 47 “Hermansson Vs Strickland” is behind us. This event will be remembered for many stoppages and great battles. There were two Performances of the Night – Shavkat Rakhmonov and Chidi Njokuani.

Chidi Njokuani stopped very tough Canadian Marc-Andre Barriault after only 16 seconds in the first round. Big right hook led to a barrage of ground and pound strikes and a TKO win.

BANG 💥 BANG 💥@ChidiBangNjoku only needed 16 seconds to get the finish in his UFC debut 😳 #UFCVegas47 (via @ufc) pic.twitter.com/h8zTQa5mXE

Shavkat Rakhmonov was a huge favorite over Carlston Harris, but fans expected a tough battle. Yet, Shavkat didn’t let diehard UFC addicts enjoy in a three-round war. A right spinning wheel kick floored Harris. Shavkat humped his opponent and landed a few more strikes before the referee stepped in.

Julian Erosa and Steven Peterson took part in a toe-to-toe three-round striking exchange, and both fighters were bleeding at the end of the match. Erosa won via razor-close split decision and it was the Fight of the Night, but the UFC chose to give Erosa both $50,000 bonuses cause Peterson missed weight a day before (149 pounds for 146-pound non-title featherweight limit).

The upcoming weekend brings the second pay-per-view event of the year, UFC 271, which is slated to go down in Toyota Center, Houston, Texas, United States. 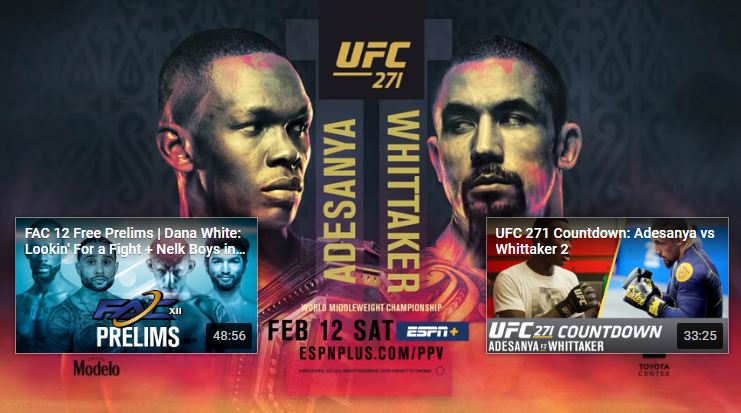 The event is headlined by the second outing between the reigning defending 185-pound champion Israel Adesanya and the former division king Robert Whittaker. The two already fought at UFC 243, where the Nigerian-born New Zealander stopped Whittaker in the second round via violent right-hand counter to win the title.

There are hints that Whittaker changed his fighting style. Some speculate that he focused on heavy bag and mitt workouts, which could lead to potential problems for Adesanya if Robert lands a big shot.

A good pick could be the fight will not go the distance (+100). Adesanya stopped his foe once, so there is a good chance of Adesanya via KO/TKO too (+120).

There is a huge KO ability as fighters hit very hard and wear thin MMA gloves. The fight will not go the distance sounds great here too, but the odd is -540. If you pick Tai Tuivasa for the upset, the value is +150. Tuivasa can’t submit Lewis, so Tuivasa via KO/TKO will bring even better value.

Here is the whole fight card, but there is a possibility of last-minute changes, so check this link too.

Don’t miss this amazing event on the upcoming weekend. Let’s see whether Robert Whittaker is going to reclaim the middleweight belt!