If you want to learn how to box then you are going to have to learn the different styles and techniques involved. Every fighter has there own fighting style, for many the style they choose is the one that best utilizes their Boxing abilities. However many fighters just use the style that comes naturally, where as some can adapt and switch style depending on their opponent.

To learn all you need to know about all the different Boxing Styles and techniques carry on reading, otherwise you best get used to staring at the canvas more than Leanardo Da-Vinci. 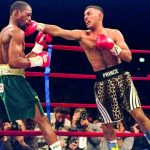 An out-boxer aims to keep a safe distance between them and their opponent and tends to use more long range punches. They are also known to utilize quick footwork to make up for the general lack of power that most out-boxers usually have. Most notable is the fact that they usually win there bouts on a points decision. The reason for this because they usually lack power they tend to throw more straights and jabs than knockout punches. 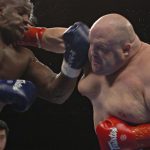 The slugger is considered the sloppiest out of all boxing styles. Sluggers usually lack stamina, overall fitness and good footwork but pack a mean knockout punch. A prime example of a slugger is Butterbean. However one thing about this style is that most people find it very watchable and entertaining this is one of the reasons why butterbean had so many of his fights televised.

The video above shows one of the most effective and well known sluggers ”Butterbean” demonstrating how dangerous a slugger can be. 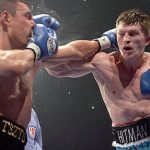 Otherwise known as an in-fighter or Crowder, a swarmer applies relentless pressure on their opponent. Good attributes for a swarmer are a solid chin, lots of power in addition to good stamina to throw the high intensity of punches needed for this style. Swarmers need to get up close and personal to throw their hooks, uppercuts and body blows resulting in them also taking a few punches before manouvreing, usually jabs. 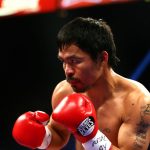 The Boxer-Puncher is a style that incorporates fast hand speed a really god jab, combination and counter punching. In many ways this style has similarities comparable to the out-boxer although the Boxer-Puncher tends to have more of an aggressive style. With the power of a slugger but much better defensive skill the Boxer-Puncher can be hard to categorize as they have some of the qualities associated with all other Boxing styles.

An orthodox boxer fights with a right handed fighting stance where as a southpaw fights with a left facing stance. Orthodox Fighters will lead with their left hand as well as jabbing and throwing hooks primarily with the left hand but the opposite can be said of southpaws. The stance you use when Boxing isn’t really chosen it’s generally what comes naturally, if you are left handed it makes sense to lead with your right so you can throw your power punches with your dominant hand and vice versa for right handed boxers.

A Switch Hitter is a boxer that has the ability to switch between both southpaw and orthodox stances. An advantage to been able to do this is that it can be off putting for an opponent. A great switch Hitter such as Joe calzaghe would switch mid fight and then back and forth confusing his opponents no end. Some of the best switch hitters have this ability naturally where as many others have to work on it in during training. 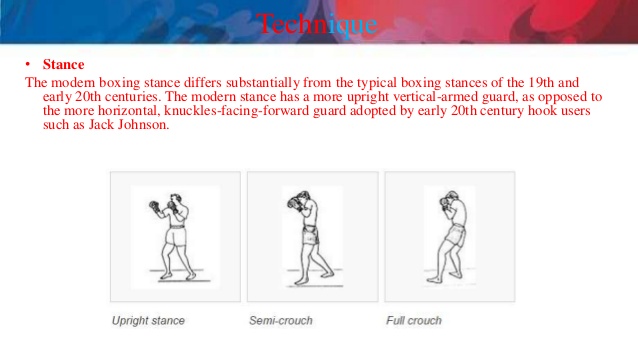 For this stance your legs should be a shoulders width apart and your back foot roughly about a half step behind your front. Also your back heel should be raised a few inches off the floor and both feet pointing inwards. In a properly balanced upright stance you should be able to maintain this position without swaying side to side or worse falling to the canvas due to been off balance.

The semi-crouch is similar to the full crouch in the way that you raise your fists in front of your face in a heavily defensive position. In addition to making sure both feet are firm to the ground the lead hand and foot are forward facing where as the back is leg is predominantly straight. This stance is highly effective at protecting the face from punches and good for bobbing and slipping.

The full crouch position requires you to get low and pull away from punches. This position is very sturdy due to the low centre of gravity and is best suited against a taller opponent as it’s harder for them to hit you with their jab. Crouch fighters also bend their hips more using the core of the body to roll under punches. 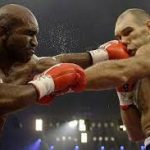 This is the most basic Punch in a boxers arsenal. The jab is a fast straight punch used to keep opponents at a safe distance or as a range finder for landing a heavier more powerful punch. A quick flurry of jabs can send an opponent into a defensive position leaving them open to body shots. 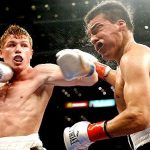 The hook is a vicious powerful punch when done correctly. A hooks power comes from the hips. To throw a hook you first have your hands in a guard position and then raise your elbow up to shoulder level. Then while swiveling your hip and using the momentum of your hip movement to create the power behind the Punch.

Fight Tip: many beginners make the mistake of drawing there arm back or winding it up before throwing a hook this only makes your opponent aware of your intentions and able to counter your move. Practice on a heavy bag throwing hooks without winding the arm. 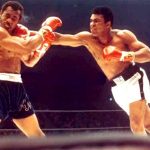 This Punch is more powerful than a jab and is thrown using the more dominant hand. When a fighter throws a cross they use their legs to support/brace the punch in addition to pivoting their back foot to provide stability, balance and power. 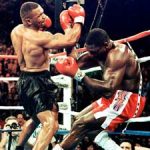 The uppercut when executed properly is a vicious Punch capable of knocking an opponent clean out if connected properly on the chin. Uppercuts are also used for body punching and a well placed one can knock the wind right out of you. The power for an uppercut comes from the shoulders unlike the hook where the power comes from the hip. This type of punch is also well used when slipping or coming out of a weave. 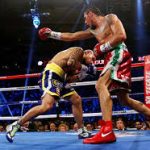 The bob and weave, first of all bobbing means to duck an incoming punch this is done while bending the legs to quickly lower themselves beneath the oncoming punch. As they are doing this they either turn their body to the left or right, depending on whether they want to be on the outside or inside of their opponent and then weave back to an upright position. 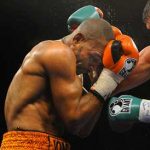 This form of defense uses the hands, elbows and if needed the forehead to block or partially reduce the force of a punch. Another crucial aspect of blocking a punch is as they say to ”roll with the Punch” this basically means to move in the direction of the Punch as it does connect so to not take the full force. To block effectively you should keep your guard high while tucking in your chin and elbows at the same time as keeping an eye on your opponent to spot their punches before they come.

This defensive technique requires both arms to be raised high enough to cover the head. The chin should also be tucked in and elbows used to protect the ribcage and from body blows. Effective covering up should be combined with trunk rotation/movement to increase the chances of dodging a punch or at least reduce the force behind it. Covering up is also used when a boxer is against the ropes and trying to get through a flurry of punches. 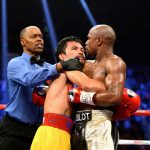 Clinching is used as a way of avoiding a punch or gain a breather, instead of retreating you move forward and cling on to your opponent effectively stopping them from been able to throw a punch. Some Fighters clinch a lot and use it as a way of tiring their opponent out. Clinching tends to happen a lot more with heavyweight fighters especially in the later rounds of a bout. 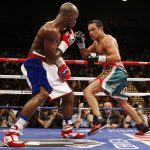 Many people associate Boxing as been all about the hands, however you can’t be a good boxer without good footwork. Footwork is essential as a form of attack and defence as correct footwork leads to a more powerful punch. In addition to providing power, good footwork can get a boxer out of a tight situation when on the defensive.

in this Youtube video you can learn what todo and what not to when it comes to boxing footwork.

The Boxing style you have is the one that comes naturally and technique can be worked on during training. Although an adaptive boxer can learn to fight with a different style, 9 times out of 10 they will revert to their natural style as what comes natural is easier to do.

For more in depth information and guides on boxing techniques go to our technique section.

UFC Austin two weekends ago was one of the best cards in the history of the promotion. Last ...

Using a vertical climber is a great way to get in shape and give yourself a full body workout in ...

UFC on ESPN 37 was one of the best cards in the history of the sport. With so many violent ...