UFC Vegas 55 was a decent card to watch. Holly Holm outstruck, out-grappled, and out-controlled Ketlen Vieira, yet, judges gave a controversial split decision victory to the Brazilian contender. Was this decision unfair? Well, you can take a look at the stats below! 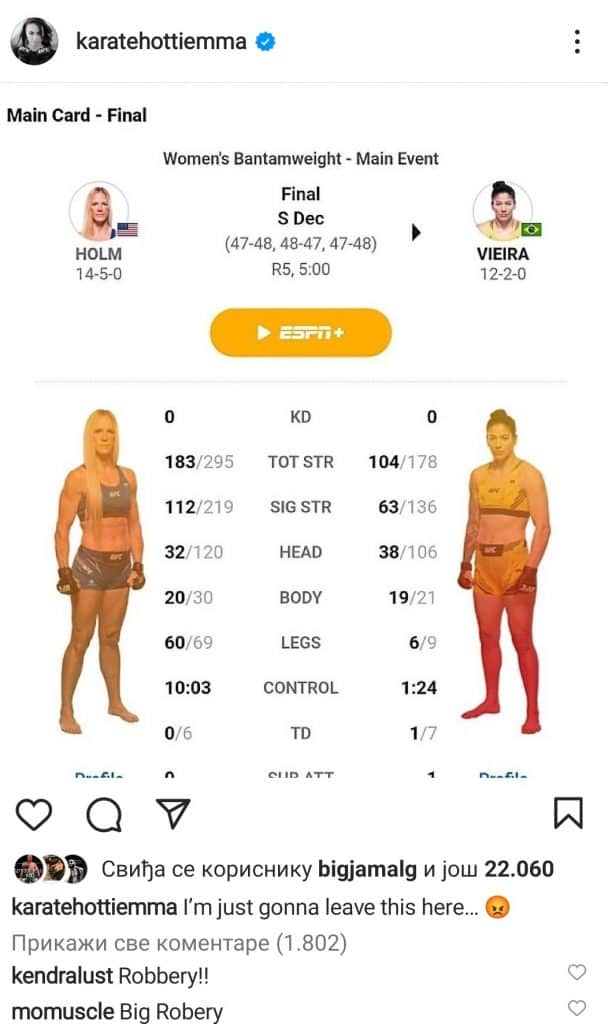 The Performance of the Night award went in the hands of Chidi Njokuani, who turned the lights out on Dusko Todorovic via a first-round horizontal elbow off the clinch. The second guy to win the POTN award is Chase Hooper. He destroyed Felipe Colares in the preliminary card with a ground and pound TKO finish in the third.

THAT ELBOW WAS NASTY 🤯 #UFCVegas55 pic.twitter.com/vtpOZ0Ee8Q

As expected, Michel Pereira and Santiago Ponzinibbio took part in the Fight of the Night. Every single diehard MMA fan enjoyed three rounds of a back-and-forth battle. Both Octagon warriors finished the fight with a lot of bruises and faces covered in blood. Pereira won via a super-close split decision, but it was a lovely clash of styles, a great spectacle. Both of the guys deserved an extra 50k on their bank accounts.

There is no UFC this week. Yet, Cage Warriors gets back to Colchester with two back-to-back events on Friday and Saturday. Many CW champs get a chance to ink UFC or Bellator contracts, so this promotion is a great springboard to the greatest MMA promotions in the world. For example, the legendary Conor McGregor is a former CW title holder. The event airs at UFC on Fight Pass.

Matthew Bonner is an all-around fighter with great cage wrestling, takedown offense, counter-punches, and excellent fight IQ. Bonner won the belt against Nathias Frederick, but then he was outwrestled by Djati Milan. Yet, “The Beast” got back into the winning column with a short-notice victory over Hugo Perreira. Matthew loves squats and deadlifts which explains the power of his whizzers, pressure on the fence, and top control skills.

Joel kicked off his career with many losses in a row, but then he worked on his footwork, takedown defense, and sweeps, which turned him into a very dangerous opponent. Please don’t be fooled by his record, Joel can put you to sleep with one quick strike!

Prediction: the fight will not go the distance, or Bonner to win

Cage Warriors 138 takes place in the same venue and city on Saturday, May 27th, 2022, but gets underway at 6:30 UK time. (you can check everything at the CW official website – https://cagewarriors.com)

Aliu submitted Dana White Contender Series competitor Leonardo Damiani in the early stages of his career, which speaks about the great potential of his ground game. James Webb rarely fights toe-to-toe, he rather shoots in and scrambles on the ground until the end of the round. Both guys can take a beating due to their great chins. You can expect an excellent ground war.

Prediction: the fight goes the distance

UFC fans, please don’t despair! The promotion gets back next Saturday with another Las Vegas card!

UFC Vegas 59 was a night to remember, there were ten stoppages in ten bouts. Aside from a ...

The last week’s UFC event was very nice to watch if you’re a grappling/wrestling fan. There were ...