How To Punch Harder – A Fighters Guide

Learning how to punch harder is a very useful weapon for any boxer to have in his arsenal. After all the harder the punching power a boxer has the more likely he is to stop his opponent.

In this fighters guide we will be teaching you all that you need to know about how to increase punching power with correct technique. In addition to correct technique our top 5 tips for those that want to learn to punch hard is a must read if having a power up punch is what you’re after.

How To Punch Harder Training Tips

First of all one thing to point out early on is that speed does not equal power. For sure having fast hands is a good thing in boxing but to throw a hard punch involves correct technique.

2) Keep Your Feet On The Ground

The key to punching harder starts with the feet. They should be a shoulders width apart and the heel of your back foot should always be raised from the ground. Been flat-footed decreases the power of a punch in addition to leading to bad footwork!

3) Point Your Feet In The Right Direction

With feet pointed at your enemy, sorry opponent as aiming a punch in the direction your feet are pointing increases punching power.

Remember to keep your knees bent at all times. The momentum gained from springing in to the latter stages of a punch again help to increase power.

Using the momentum gained from moving your hips in the correct way vastly adds power to a punch. Following the movement from your feet and through your legs (also known as flow of energy) is hip movement. Moving the hips creates torque and a lot of power that is transferred through your torso and then shoulders.

It doesn’t matter if you have done correctly all that we have mentioned so far, If you don’t have proper arm and fist technique your punch wont be nearly as effective as is could be.

As with the shoulders the arms should be relaxed. When throwing the arm in to a punch it travels through the air a lot easier than a stiff tensed arm. The key is to tense up and clench the fist just before the moment of impact to deliver a hammer blow to send your opponent flying towards the canvas.

Another aspect of correct arm and fist technique is to punch in a straight line and not with an arc. Throwing a punch with an arc will only help to diminish the overall impact force.

The Kinetic Chain/Flow Of Energy 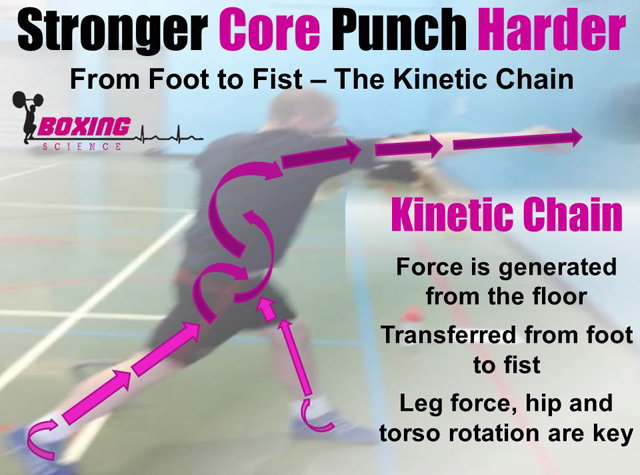 5 Tips On How To Increase Punching Power

Having the feet firmly fixed to the ground creates a great anchor point to generate power from. The moment the you raise your feet power produced is affected. However the back heel is raised in the final stages.

2) Exhale Before You Punch

Exhaling or breathing out is essential in helping the muscles remain loose just before impact. Remember been stiff and tense isn’t beneficial. As you have probably seen or heard rather, many boxers and other combat sportsmen let out a grunt as they exhale. one particular favourite is Ricky Hatton who used to sound like a pit bull when he was going at it hard.

Otherwise known as “telegraphing” winding up a punch gives away the fact that a punch is coming. Many beginners to boxing do this and it leads to them becoming predictable and for someone more experienced it is something they will quickly take advantage of. The best punch and the one that hurts the most is one that isn’t expected.

4) Aim Where It Hurts

If you really want your opponent to feel your power then it makes sense to hit them where it hurts the most. The four best places to hit someone in boxing are the chin, head, solar plexus and ribs. A well aimed punch with correct technique in any of these four points will go a long way to helping overcome an opponent.

If you take on board all we have said in this Fighters Guide on how to punch harder then you will be a big step closer to that knockout punch.

In our next Fighters Guide we will be explaining all you need to know about boxing footwork.

UFC Austin two weekends ago was one of the best cards in the history of the promotion. Last ...

Using a vertical climber is a great way to get in shape and give yourself a full body workout in ...

UFC on ESPN 37 was one of the best cards in the history of the sport. With so many violent ...